Get to know Music on the Steps artist Angela Easterling 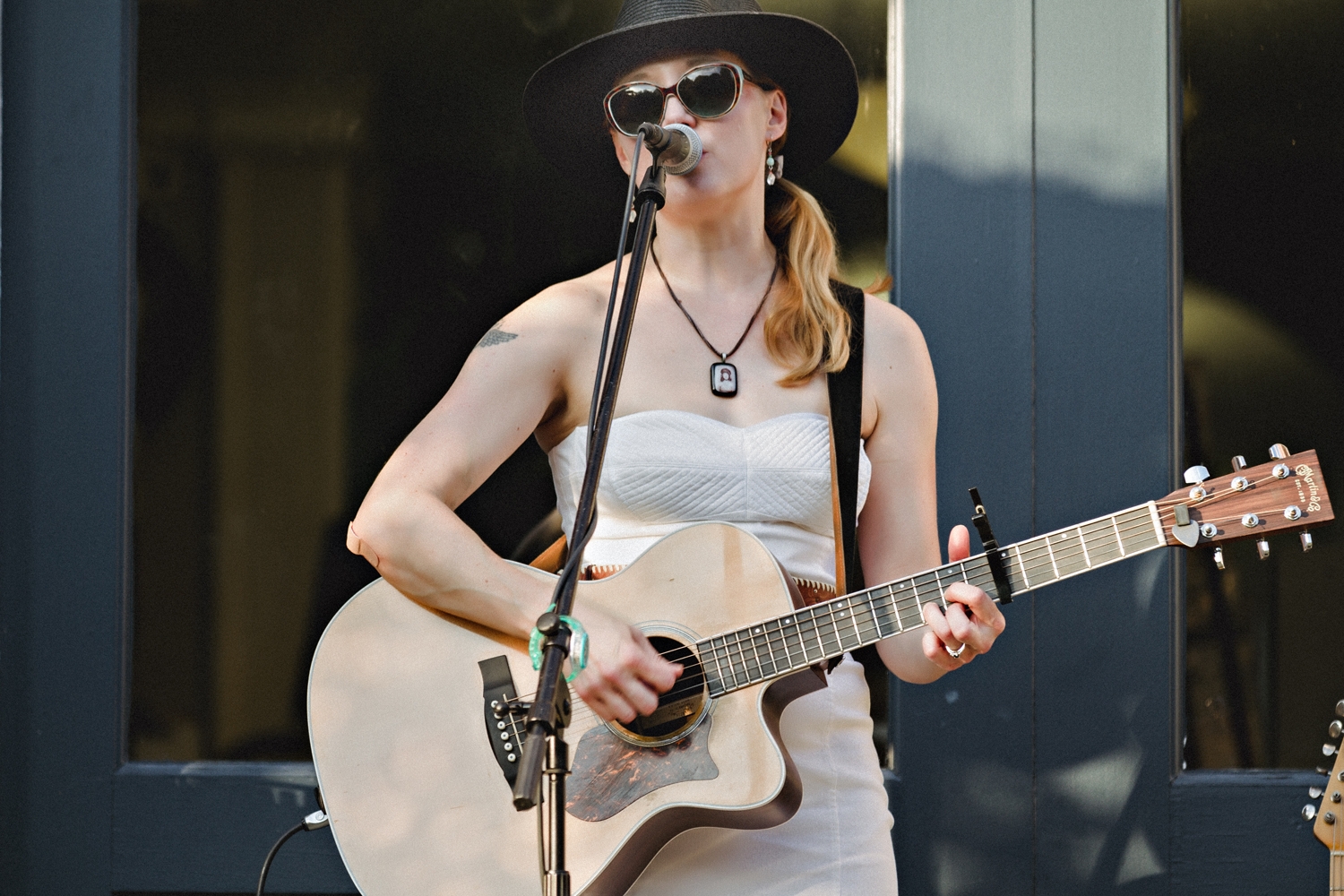 Singer-songwriter Angela Easterling's musical journey took her all the way to Los Angeles, then back home to Greer, S.C. Easterling grew up in Greer and attended The Fine Arts Center, an arts high school in nearby Greenville. There she studied musical theater and appeared in many local theater productions. She then went to Emerson College in Boston where she continued her theater studies. It was there that she began to take an interest in songwriting, which provided a way for her to tell stories and also sing and act them out.

“What I found was that with writing my own material I could create my own opportunities for performing instead of hoping I could get cast in a play,” said Easterling. “I could just go down to open mic night and play some songs that I wrote. … I like to use the first person a lot because I think it comes off a lot stronger. In a way it's like a monologue that I grew up doing in theater. ”

Easterling then transferred to the Emerson College campus in Los Angeles to explore a different part of the country and possibly pursue an acting career. Although a daughter of the South, she had never really listened to country music until she moved to California.

“People always said, “You sound country, you should sing country music,' ” said Easterling. “To me country music was like Kenny Chesney. I just didn't know anything about it. I was ignorant about all of the great writers and songs of country music, the wide span of it. I started listening to Emmylou Harris and Graham Parsons; Neil Young; and Crosby, Stills & Nash; and of course Merle Haggard; and all that sort of California country and country-rock. I wanted to explore that genre with my own writing because when I first started writing I was doing more of a straightforward folk-pop type of thing. So getting into the Gram Parsons and Emmylou Harris-type stuff really opened the door for me and I just fell right in and got so into it.”

Having decided to focus her creative energy into her music, Easterling cut her first album in L.A. But the high cost of living there and better touring opportunities on the East Coast led her back home to Greer.

“I wanted to live somewhere where I could just park my stuff and go on the road and it would be cheap and easy,” said Easterling.

Since that time her songwriting has developed and she has released four more albums. Easterling's songs range from traditional heartache country ballads to songs that examine difficult social issues. One of those songs tells the story of Issac Woodard, an African-American World War II veteran who was beaten by South Carolina police in 1946 so badly that he was left permanently blind. The sheriff responsible was later arrested but acquitted by all white jury.

“That's an absolutely true story,” said Easterling. “The key to that song for me was the uniform, the fact that he was in uniform and the police were in uniform and they all should have been on the same side. What those uniforms meant, or were supposed to mean… That seemed like something from a long time ago in the past, but then the week we were in the studio recording the album, all that stuff was going on in St. Louis. When the album came out, Dylann Roof walks into a church in Charleston and kills people for being African-American, right here in my state. All those things just go to show that our past is not as past as we think it is.”

Another socially conscious song by Easterling is “American ID.” Although the song was written almost a decade ago, it sounds like she is singing about the current divided political climate.

“I wrote that song a few years back when I was thinking about how divided our country is and it seems like we've only gotten more divided since then,” said Easterling. “When I wrote that song, I was really trying to find some common ground with people. I live in a red state and all around me are people I disagree with politically, even in my own family. So I was just really trying to find, where do I fit into all this? How can we come together? I really do believe that our culture and the things that we have in common are greater than the things that keep us apart. It's just sometimes it's so hard to see those things that we have in common. We look for the things that divide us.”

Not all of Easterling's songs are so heavy with social weight. The title song of her last album, “Common Law Wife,” tells her own true story about her relationship with her musical and life partner, Brandon Turner, whom she met when they began playing music together in 2009.

“That's one of the true stories on there,” said Easterling. “That's about as true and straightforward as it gets. There's no real subtleties in that song but that's OK. That's not what I was going for, I was just going for a fine little romp through my world.”

Easterling and Turner often play as a duo, which is how they will appear Monday night as part of the Central Rappahannock Regional Library's Music on the Steps free concert series. Turner adds sophisticated electric guitar textures and harmony singing to Easterling's songs.

“I met him playing in town and just thought he was a wonderful guitar player, very nuanced and subtle and he can sing harmonies really good,” said Easterling. “I just thought I need to get that guy to come play with me. He was busy so it took a while for him to have some time to come play some shows with me. We really hit it off musically. I love playing with him, and we hit it off personally as well. We just got to be really good friends and one thing led to another and now we have two kids.”