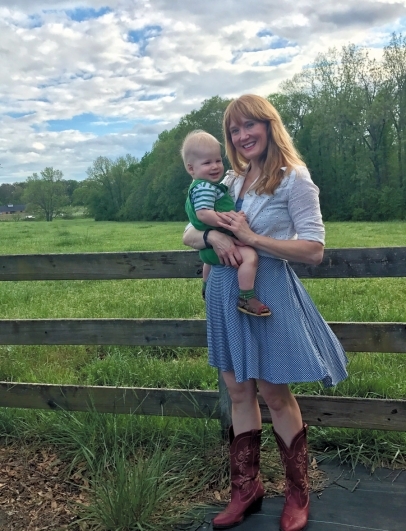 By Ashley Warlick / Photography By Ashley Warlick | June 07, 2017
VISIT THIS LINK FOR THE FULL ARTICLE, WITH PHOTOS AND FAMILY RECIPES! http://edibleupcountry.ediblecommunities.com/shop/land-greer-s-hammett-farm

Harrison Hammett Turner is the tenth generation to live on Hammett Farm, some 80 acres of pasture, pond and greenhouses off Hammett Bridge Road in Greer.

Standing in the kitchen, watching the afternoon traffic whip past the picture window, it's not an easy thing to imagine ten generations. Go back before the sprawl and strip malls, back to when this road was dirt, when there was farm after farm in this part of the Upstate, fields of cotton and crops and livestock. Go back, really, to the beginning. This land has been in the Hammett family since 1791; before that, it belonged to the Cherokee.

Today, Harrison is wearing a snap button shirt with cowboy appliques on the chest pockets and spiffy, new-looking boots. He introduces his younger brother, Miles, who sports John Deere overalls, a devilish laugh and a pretty serious case of drool. Harrison has not taken a nap today. “He was too excited,” his mother says, “so he's been extra himself.”

I'm here to talk to Harrison's mother, local musician Angela Easterling. Angela has spent the last couple decades making her name as a singer-songwriter, as a strong female voice from the storied South, and this family landscape sustaining its float in a sea of suburbia is home in more ways that one. You can see Hammett Farm as a recurring character on her albums Black Top Road and Common Law Wife, the kind of themes and concerns it inspires, in turn, inspiring her.

But too, Angela and her partner, guitarist Brandon Turner, moved back here to the farm when she was pregnant with Harrison. This generational pull is powerful stuff. In a way, Harrison is why we're really here.

Extra-himself, Harrison Hammett Turner is a charmer, easygoing and chatty, the kind of four-year-old who casually takes my hand walking out to the pasture to see the cows, because he's also holding his great aunt's hand, and I'm on the other side. It's what makes sense.

With the traffic behind us, we take a gravel path between hay barns and garages built generations before by Angela's grandfatherGÇöher aunt Ruthie, aunt Sarah and mother Mary's father, Harold Hammett. “He wasn't just a farmer,” Angela says, with a twist to the word “just,” but a man who wrote poetry and spoke French, studied history as well as planting practices, graduating from Furman with a degree in chemistry before fighting overseas in World War II. It's a legacy Angela identifies with this place. “Over two hundred years ago, people with the same blood as me were out here working,” she says. “It's hard to be lazy when you think about that.”

Nine to five, her grandfather was a chemist at Texize, a Greenville company that sold industrial cleaners to textile mills. The rest of the time, he grew cotton and sweet potatoes, raised chickens and pigs. (Angela was often told as a child she should be glad she didn't have to pick cotton.) She's read letters her grandmother Helen wrote home to Virginia, about rising at four in the morning to collect eggs for market, raising three young daughters while teaching grade school herself. For Angela, there's something in that ability to balance such a full life that feels seated here as well. She's certainly anything but lazy.

To date, she's released five albums, praised everywhere from Oxford American to NPR, and she's presently at work on her next. She's appeared with Lucinda Williams, and you can hear a songwriting lineage between them too, rich rural imagery paired with clear, bone-deep emotion. Angela will be touring throughout the Southeast, throughout the summer, and the farm is her base when she's on the road. Her aunt Ruthie often cares for the boys when she and Brandon are playing shows. Her aunt Sarah's greenhouses line the border between the pasture and the woods, and inside the largest one, there's a sandbox scattered with toys.

Ruthie calls to her sister, the deep tones of her accent sounding like Say-rah.

In her greenhouses, Sarah grows vegetable plants and ornamentals, exotics like angel wing begonias and succulents. “A lot of viney stuff,” she says, like morning glory, moonvine and hummingbird vine, plants she sells at her stand at the State Farmer's Market on Rutherford Road in Greenville. “Every day you have to go along and untangle each from their neighbor,” she says of the vines. “You can't put them far enough apart.” Old-fashioned bloomers, they'll cover 20 feet of fence in a season. “Don't put them on your mailbox, or you won't get any more mail.” While we're talking, she takes Miles from Angela's arms and lets him play with her baseball cap, trying it on himself, back on Sarah, back on himself, his big toddler smile a heartbreaker.

The cows are down by the creek this time of day, and need to be coaxed out with a bale of hay. Sarah is a little skeptical, as the early summer pasture is still flush with grass. “When they got all this food, they don't need me anymore.”

The cows are the primary job of Bill Collins, a Korean War vet now in his 80s who apprenticed on the farm with Harold Hammett, taking over herd management in 1997 when Harold passed away. Angela calls Mr. Collins a dying breed himself, a man who does things the old-school way. She says, “He'll be out here in the middle of the summer, when it's just as hot as it can be, and he'll sit in the barn and eat his lunch that his wife packed him from home.” And then go on back to work.

The herd is smaller this year, because Mr. Collins is getting older and last year's drought was particularly hard on the hay crop. Sarah says it often seemed to rain everywhere but here, “like God put an umbrella over this place.” There's an Angus bull in another pasture, and six cows and a new spring calf, now lumbering out of the treeline towards Sarah's minivan.

Angela says, “When you live on a suburban cattle farm, you get the strangest visitors.” She tells me about people walking up to the house, wanting to milk the cows, hunt the land, as though the farm's proximity entitles neighbors to a share in it. It works the other way as well, cows doing like cows do, getting into the road, into people's yards and swimming pools. “My father used to say that fence is just a suggestion,” Sarah says. “Our bull wouldn't even notice it.”

Harrison got to name the new calf, and he decided on Baby. “When he grows up,” he says, “I'm gonna name him Grown- Up.” He might not be a he. Calves are tricky to sex, Sarah tells me; it's not like you can just turn them over and look. If Baby is a he, he won't be sticking around long. Hammett Farm sells their bulls at auction. Actually, all the Hammetts on this farm have been women for a while. Harrison is the first boy born to the family since Uncle Gene in 1923. Gene and his wife Dorothy cared for the farm while Harold was away at war.

“The land is such a gift,” Angela says. “Everybody in our family has the same respect for it.” She's watching her aunt driving back across the pasture in the late light, Harrison riding beside her in the minivan. “The connection here gives you such freedom as you move out into the world.”

It's hard to put the sensibilities of good music to paper. But the song Angela mentions most in our conversations is “Hammer,” the lead track on Common Law Wife, completed the day Pete Seeger died and inspired by her grandfather. You miss the particular trill of pedal steel when you're just looking at the lyrics, the high wind delicacy of Angela's voice, but you can see the echo of Seeger's “This Land Is Your Land,” tilted in her own personal direction.

Back at the house, Angela has made supper, the centerpiece of which is her great aunt Frances's recipe for chicken curry. In the 1940s through the 1970s, Frances Hammett lived in Nigeria, then Tanzania, as a missionary nurse for the Southern Baptist Convention. She would spend three years abroad, then one year of furlough back home on the farm. “She was the first person who ever told us about a pizza,” Ruthie says. She never married herself, but she had nine nieces.

Ruthie fixes me a plate, simple stewed chicken over rice, made special by the wide array of condiments you dress it with, everything from cilantro and raisins to citrus and hard boiled eggs.

There's also kale, long-cooked with lots of herbs and a little honey per Angela's own kitchen improvisations. She likens it to country-style collard greens, but better for you. “Brandon's been on a health kick lately,” she says, smiling his direction, the rattle of Ruthie and the boys at the table behind her.

Brandon's gathering his guitar, getting ready to leave for the evening's house performance, his night out. He and Angela met playing music, and play together still. “If you have musical chemistry,” she says, “you might have other kinds of chemistry too.” She walks him to his truck.

Angela copies these family recipes for me, complete with Frances Hammett's notations about the relative heat of different curry powders and how expensive and tough to get mango chutney can be here in the US. 1950s Africa is a really long way away. I think again about the connection to this land Angela spoke of, tying people back across continents and generations, literally through time and space. It does seem suddenly extraordinary: this meal, this kitchen, today.

In the living room lined with banjos and guitars, there's a portrait of Helen and Harold Hammett on their wedding day. There's an old fashioned globe, set atop a turntable, a schoolhouse-style pencil sharpener, mounted to the wall. There are kid books and baby toys, the cheerful clutter of a life filled with small boys, but the room is dominated by a fireplace and hearth. The mantel is from the original Hammett cabin, circa 1791. It's not hard to imagine that mantel will still be here when the boys are grown, when they've taken their own spin around that globe, and then followed the undeniable pull back home.

One thing's for certain: this land will still be theirs.