Angela Easterling, On The Road In Search of America 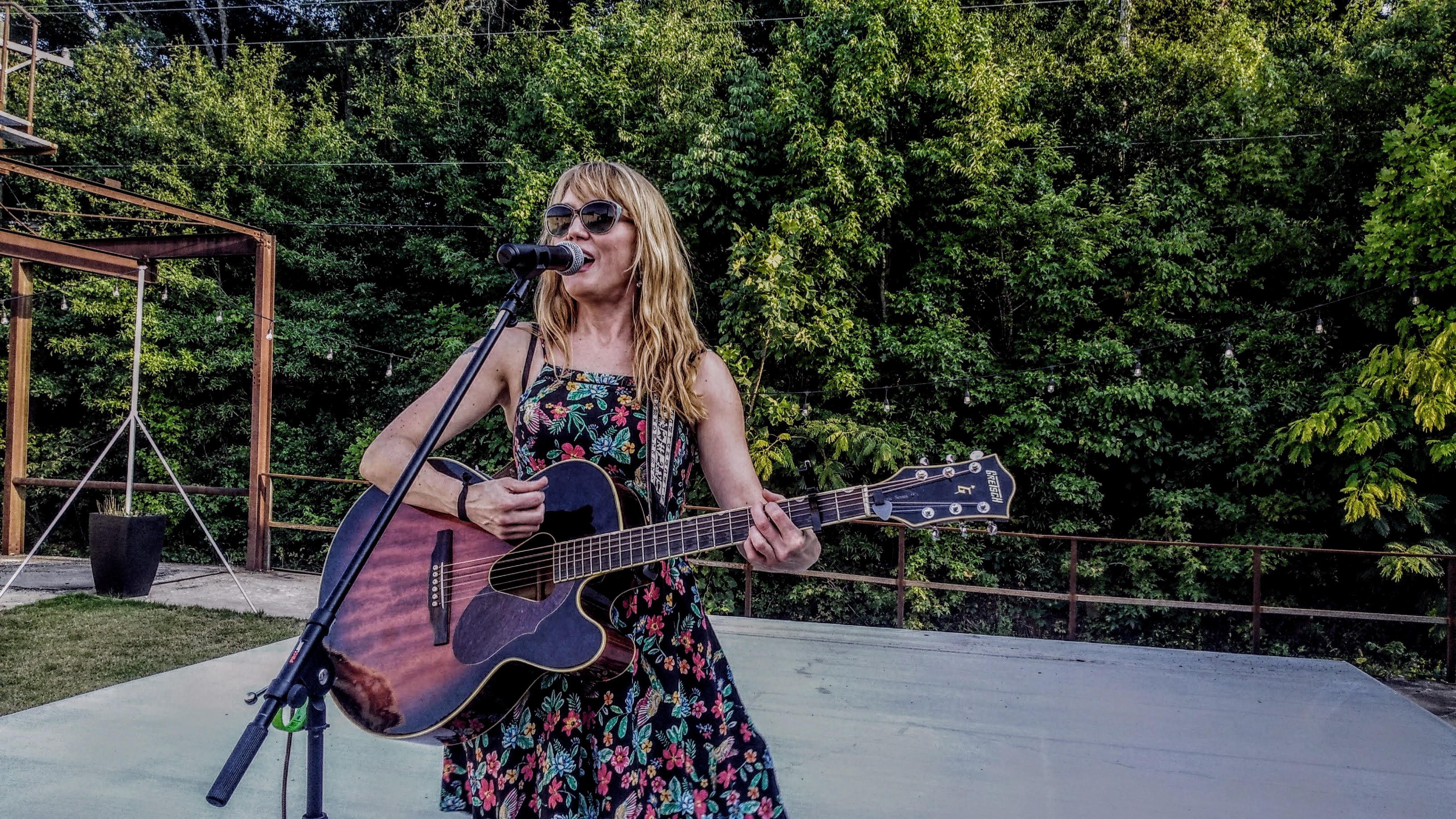 It was a Sunday we’ll never forget. On a morning when the country was still reeling from the tragedy in El Paso, we woke up to learn of the massacre in Dayton. Amid the disbelief that “it can’t happen here,”  was the sobering realization that yes it can and it is seemingly happening all around us.

I had been planning to see South Carolina native Angela Easterling play a free library show in Northern Virginia. But the idea of listening to music and being around people took on a new meaning given the events of the weekend.

When I spotted Easterling and her musical and life partner Brandon Turner at a table In the open space of the Cascades Public Library, she might have seemed like just another patron deep in thought. But Easterling was choosing songs she would be playing trying to reflect the mood and moment.

In the non-descript room where they play, it’s just their two guitars, her mandolin and some speakers . After dropping off the set list, they come back to see a few familiar faces who have been here for the last few Augusts, giving the road some sense of familiarity. It was a similar feeling the Friday before when she and Turner had played in the Washington, D.C. living room of Paul Eckert. Eckert hosts the Lucky Penny concerts in the nation’s capital and is among a network of house concert hosts who provides a lifeline for independent artists like Easterling.

Easterling chooses to open their set with a song that’s recognizable but not one she wrote. It’s Buddy and Julie Miller’s rueful “Wide River To Cross.” Coming out of the song, Easterling acknowledges the sadness of the day and admits to the twenty or so of us gathered in a semicircle that starting with one of her faster, more energetic songs wouldn’t have been appropriate.

Easterling wrote the next song  “American ID” over a decade ago on her second album Black Top Road. As she explains and then sings, despite the country’s differences, she still believes the things that unite us are still greater than those that divide. The affirmation reminds of the country’s turbulent history in just a few minutes and verses.

Twenty years ago she moved from South Carolina to Los Angeles in hopes of launching a musical career. There she discovered her longing for country music. Upon her return to Greenville in 2007, she attended a show in Spartanburg where she met guitarist Brandon Turner. Easterling introduces herself and over the next few years tried to get Turner to play. One thing led to another and now the couple has two children, ages six and three, and have made four albums.

Easterling, who switches between mandolin and guitar, provides a foundation to let Turner do his bluesy picking and slide accents. The beauty of a small room is feeling how seasoned the two are and become their own mini-band. When Easterling mandolin doesn’t cooperate with tuning, she dials up a joke. “They say Bill Monroe got so upset he’d bust up his mandolin into a bunch of pieces and send it back to Gibson and say it was broke.”

Easterling’s comic sense comes to life in the song “Common Law Wife,” a sly,  hilarious romp that pokes fun at her domesticity. Once asked by a journalist who how she came up with such a classic country song she responded, “Well it’s basically my life. I guess I’m living a classic country song.”

After the show, Easterling talked with me about the Millers’ song, one that resonates and is not about a specific situation but a journey.

“We’ve got a wide river to cross and right now we don’t know if we’re gonna get to cross it and what’s going to happen,” she reflected of  the song’s timeless metaphor and the times we live in.

In the hour-long set they played “Halfway Down,” a song she wrote in the aftermath of the country music festival shooting in Las Vegas. Easterling and Turner’s family farm in Greer is near a firehouse. She got the idea when she found that flags flying at half mast were becoming more and more common. “Halfway Down” is a song she wishes she didn’t have to write let alone ever sing again.

“I wish I could get to the point where that song is so irrelevant,” she admits. “Every time something like this happens it’s like ‘Here we go again’ and I just think we’re getting numb. It just seems like we go back about our business.”

Like most of us, Easterling admits she doesn’t have the answer. Buy she feels the need to talk about it and her profession offers a unique platform to give voice. That’s reflected in a new song she is readying for her next album titled “Have You Seen My Friend?” The friend is America and it’s words reflect her search for the comforting familiar country she grew up with.

“I’m wondering if it was true to begin with,” she says looking slightly away as she finds her words. “I wonder if it’s ever going to come back and if my kids are going to experience America the way I did…with its’ place in the world, its purpose and it’s vision.”

The couple’s children are at home with their grandparents. Easterling beams with pride that they’re the tenth generation of her mother’s family. The song “Hammer” was inspired by her grandfather who built the house and buildings on the family property.

“There’s nothing like standing on land and knowing your bloodline was on it two hundred years ago and worked the land. A lot of people can’t say that.”

It comes with a cost. As commercial development encroaches around the family’s eighty acres, the threat of eminent domain being invoked grows. It spurred the song “Black Top Road.” Against the strident fury of the words in Easterling’s protest song, Turner gave a picking clinic.

“For now we have it,” Easterling says. There’s no pressing issue to deal with at the moment. But the family needs the farm to continue showing a profit just to maintain its status.

This week, there’s more libraries to play. There will be plenty of time in the van to ponder these larger life issues and miles to go to find the answers.